NOTICE: We are open and fully operational for servicing our clients, however, in light of the Coronavirus (COVID-19) all consultations will be conducted by phone or video conference until further notice. Please contact the firm for more information. 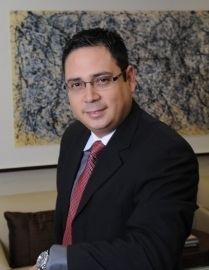 Mr. Saenz was born in Peru and is also an immigrant who has achieved the American Dream. The legal profession is rooted in Mr. Saenz's family, his father was a judge, and a prestigious attorney before retiring in the U.S. Mr. Saenz followed his father's footsteps and, following three years of legal training at the San Martin de Porres University in Lima, Peru, moved to the U.S. in 1994 where he studied political science and pre-law at Syracuse University in Utica, N.Y. He graduated with honors in 1998 with a Bachelor of Arts degree, and with a special award for being the Outstanding Senior in Political Science. Mr. Saenz continued his legal studies in N.Y at the Syracuse University School of Law. While in law school Mr. Saenz was an intern with U.S. District Court Judge, Andrea Simonton; was the executive director to the law school's Journal of International Law and the editor to the Law & Technology Journal; a member of the Vienna International Commerce Moot Court Team; and a member of the National Security Law Team. All that hard work paid off when Mr. Saenz obtained his Juris Doctorate degree in 2002. After ten years of practicing law, Mr. Saenz is now domiciled in FL and is the current managing partner of The Saenz Law Firm, an elite labor and employment litigation firm in South Florida. Mr. Saenz has been an active member of the Florida Bar's Labor & Employment Section since 2007. Mr. Saenz's extensive experience representing large multinationals employers throughout the U.S. and South America provides our firm with an advantage counseling employers on immigration policy, I-9 compliance, and global corporate migration.